This tour includes 9 experiences, to be completed in 6 days. These are monuments and places considered a Must See for those traveling to Calabria, travelers who want to discover its unmissable beauties. It is a short tour, a concentrate of touristic offer, of recognized excellence. The splendid marine scenery of Le Castella combined with the magic of the village placed on the rock of Santa Severina, which really looks like a “stone ship”. The painting masterpieces belonging to Mattia Preti , influenced by Caravaggio style, are kept in Taverna, his town. Scolacium, the Roman archaeological site with the graceful red brick architecture of the medieval basilica of santa Maria della Roccella. Pizzo Calabro, with its particular “tartufo” ice cream (the classic is soft hazelnut, covered with cocoa powder, with a heart of melted dark chocolate), which perhaps takes its name from a chocolate praline made in Piemonte in the 1950’s.

The Bronzi di Riace, symbols of Reggio and “ambassadors” of Calabria in the world. The Sila, the Calabrian forest to be discovered, with an exciting trek through the protected area of ​​the National Park. Stilo, with the most illustrious trace of Byzantine architecture in Calabria represented by the small church of the Cattolica at the feet of mount Consolino. And a little further to the east, on the Ionian coast, we finally reach Monasterace and the archaeological park of ancient Kaulon, where the museum preserved the well-known Dragon Mosaic, which has recently found a remarkable popularity among professionals and tourists who visit the deep south of the region. 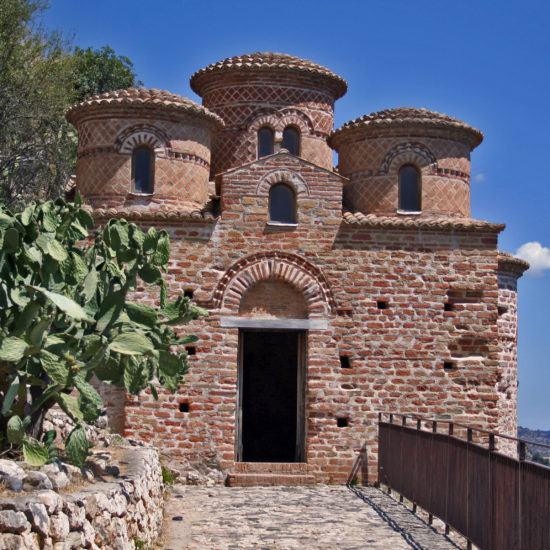 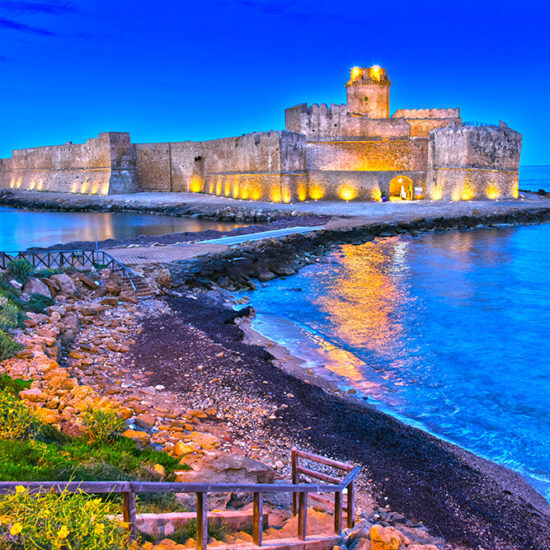 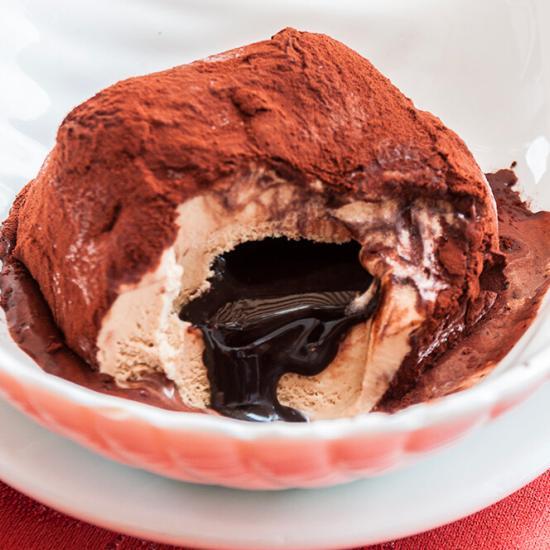 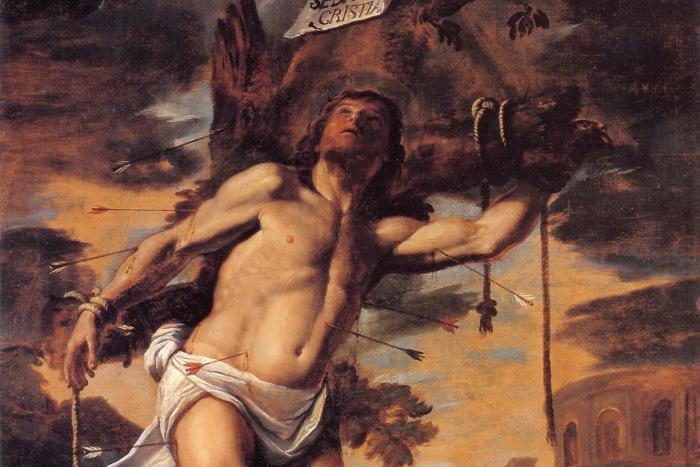 Tourists arrival in the morning at LAMEZIA TERME airport and transfer by bus to a hotel in CATANZARO. The regional capital offers functional hotel solutions for all the tours planned in the various provinces. Lunch at the hotel. In the early afternoon the tour starts reaching Taverna, a small village at the feet of Sila Piccola, one hour by bus. In the Civic Museum of Taverna, housed in the former dominican convent attached to the monumental church of san Domenico, you will admire works realized by several painters. In particular, we will focus our attention on the collection of the great Mattia Preti, celebrated artist of the '600 who left in the church some of the most meaningful paintings of his long activity. The so called "Cavaliere Calabrese", who worked in Rome, Naples and Malta, is appreciated by art lovers all over Europe.   Entrance ticket: 5 euros per person. We're going to check if there are discounts and free pass.
2 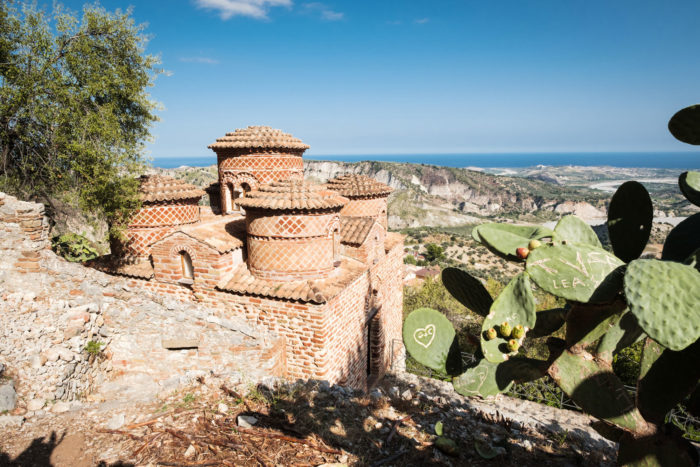 Stilo, birthplace of the philosopher Tommaso Campanella, in the valley crossed by Stilaro river, "inaugurates" – moving to south - the fascinating and wild territory of Locride, also identified with the name of Costa dei Gelsomini. Here, we will stop in the Cattolica, a small church that was a meeting and prayer place for monks following the rule of st. Basil, probably in the IX-X centuries. It shows a square plan, it was made of red bricks (various shades of red), three apses looking at the East as the Byzantine liturgy wanted, five cylindrical domes that make it wonderful and recognizable among the various symbols of medieval Calabria. Packed lunch or in a local restaurant. In the afternoon, transfer to the Ionian coast, where we will visit the archaeological park of the Ancient Kaulon (we are in Monasterace), then the museum where splendid finds are preserved together with the most cherished "flower": the Dragon Mosaic. It is a polychrome work, depicting a fabulous sea dragon and it constitutes the threshold of a great hall, probably an androceo (part reserved to men), a superb mosaic example of Hellenistic age. It is composed of large pieces of marble, colored stones and lead sheets, it is dated around the 3rd century BC .   Cattolica entrance ticket: 4 euros per person. Kaulon museum entrance ticket: 4 euros per person. We're going to check if you can pay less, special offer or discount.
3 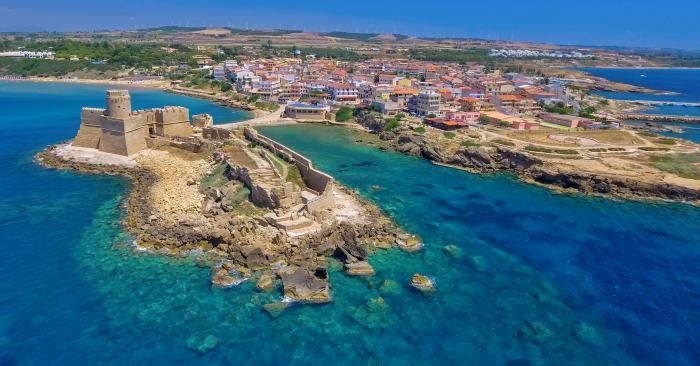 In the morning we will visit the medieval fortress of Le Castella, a dreaming scenario. Lying on the sea, on a rocky islet, the fort has an overwhelming fascination. In the past it attracted directors such as Monicelli and Pasolini, who in the 1960s shot some scenes of L’Armata Brancaleone and Il Vangelo secondo Matteo. Lunch in a local restaurant. In the afternoon we go up in the hinterland towards Santa Severina, the village set on a rock that many call "the stone ship". We will visit: the castle, the cathedral of saint Anastasia and the byzantine baptistery next to it. A good opportunity to learn about the historical evolution of the villages and the birth of castles.   Le Castella aragonese fortress ticket entrance: to be defined. Castle S. Severina, entrance ticket: 4 euros per person. We're going to check if there are discounts and free pass.
4 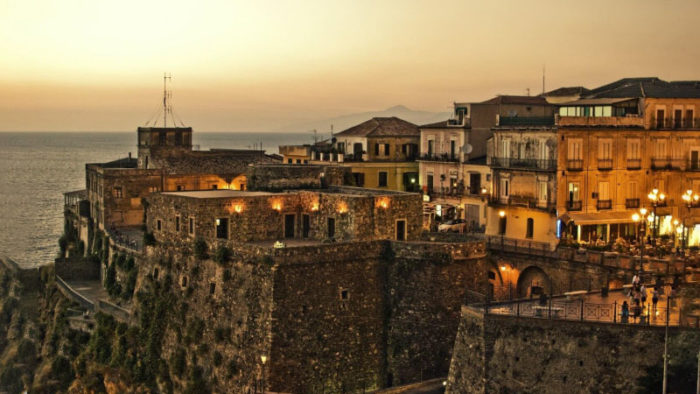 Pizzo, sunset view of the castle where Joachim Murat was shot

A whole day to explore the Costa degli Dei (Pizzo Calabro) and to know the most famous bronze statues in Italy, an unmissable stop for those who come on holiday in Calabria. To be so close to the two bronze warriors, well, that’s some kind of magic. In the morning a stop in Pizzo, walking along the panoramic terrace of piazza della Repubblica, to taste the famous tartufo (ice cream), the most popular pastry specialty; then a guided tour of the Murat castle (Napoleon's brother-in-law was imprisoned and shot here) and st. George cathedral. Packed lunch or lunch in a restaurant in the historic center. At about 14.30 we’ll move to Reggio Calabria. After visiting the Bronzi di Riace and the rich exhibits of the National Archaeological Museum, home of Magna Graecia, we will make a brief stop on the marvelous Reggio's waterfront for souvenir photos enjoying the Strait.   Murat castle entrance ticket: 1.5 euros per person; Reggio Calabria museum: full ticket 8 euros (5 euros from 18 to 25 years old, free pass for UE citizens under 18). You get a special discount all Wednesdays: full ticket 6 euros, 4 euros the reduced one.
5 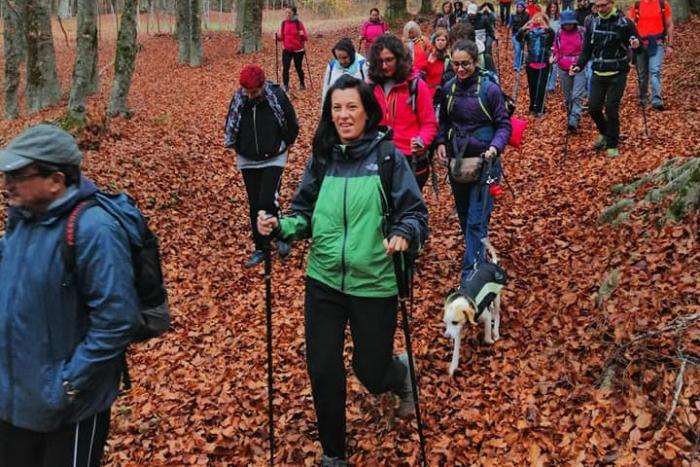 We’ll walk through the green heart of Sila Piccola, passing through centuries-old forests of beech trees and valleys where we will see the remains of the "vaccherie", old stone huts built by shepherds. In the summer, during the transhumance period, they lived and prepared there the delicious Caciocavallo Silano (aged cheese made with the milk of cows). Our environmental guide will propose an eco-sensory experience: all five senses, through smells, sounds, lights, shadows, tastes and tactile sensations, will be stimulated to gift you a total experiential involvement, incredibly symbiotic. Otherwise it is possible to cross the exciting canyons of Valli Cupe close to Sersale, a fabulous scenery.   No entry tickets to be paid.
6 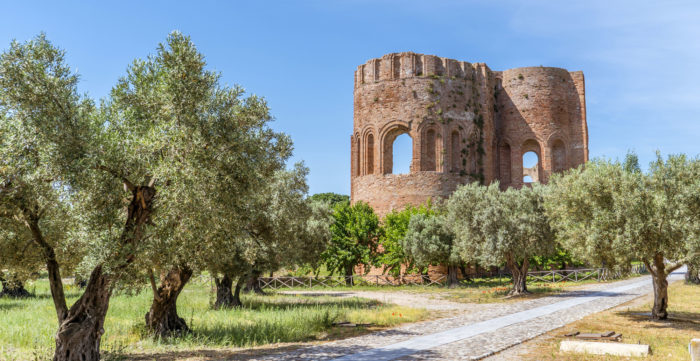 We will go to the archaeological area of the Scolacium park - the Roman Calabria - in the locality of Roccelletta di Borgia, near Catanzaro. We will analyze the roman colony forum, whose excavations stand out in the middle of a magnificent olive grove. We will admire the ancient constructions of the theatre and amphitheatre, the majestic architecture of the church made of red bricks, santa Maria della Roccella, formerly Byzantine monastery and later an abbey church during the Norman domination, who imposed the Catholic religion in the region. The museum, supervised by the Ministry of Cultural Heritage, is full of very interesting finds belonging to the protohistoric age, the Magna Graecia and the Roman age. Lunch at the hotel. Then transfer to LAMEZIA TERME airport.   Park and museum entrance ticket: 5 euros per person. We're going to verify if you can pay lower fares. 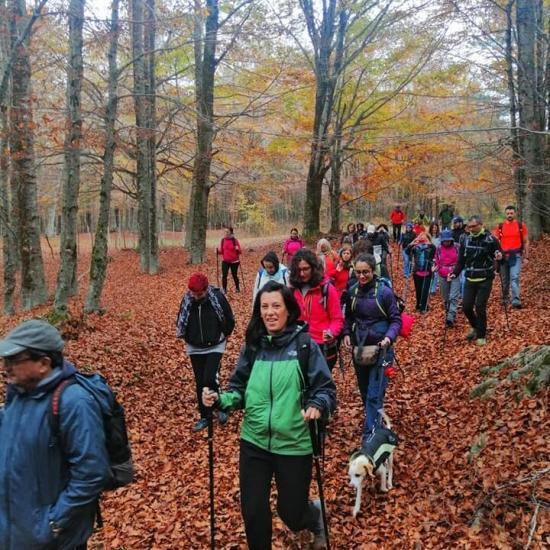 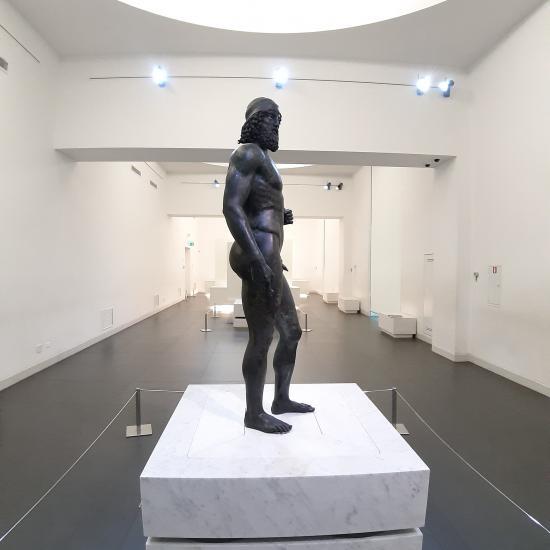 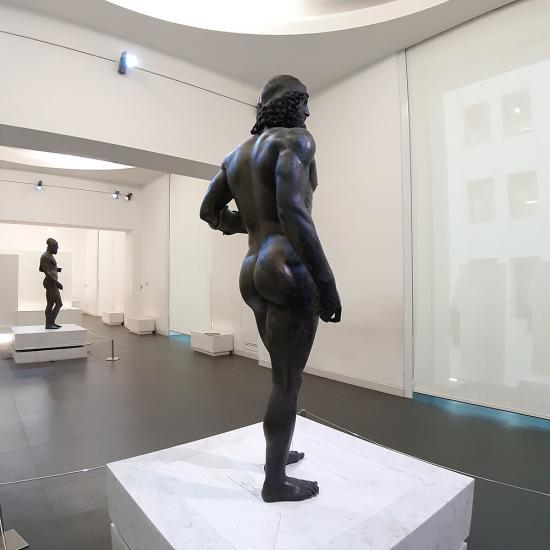 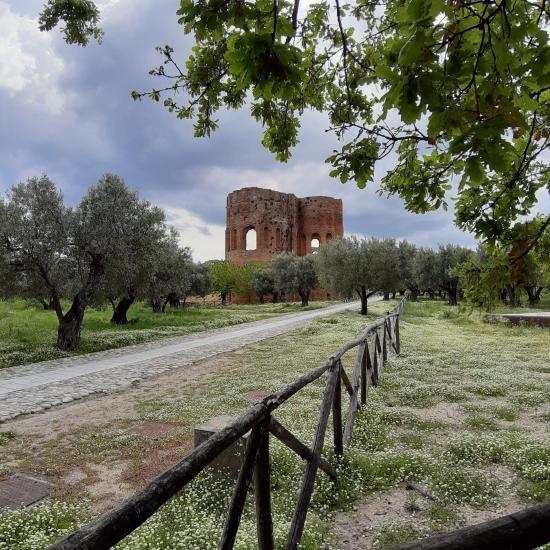 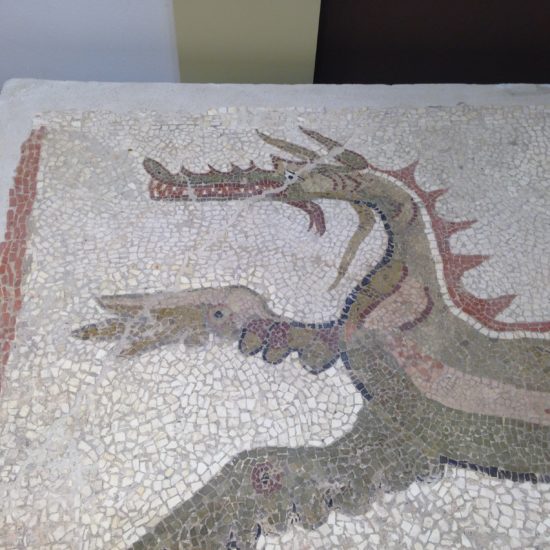 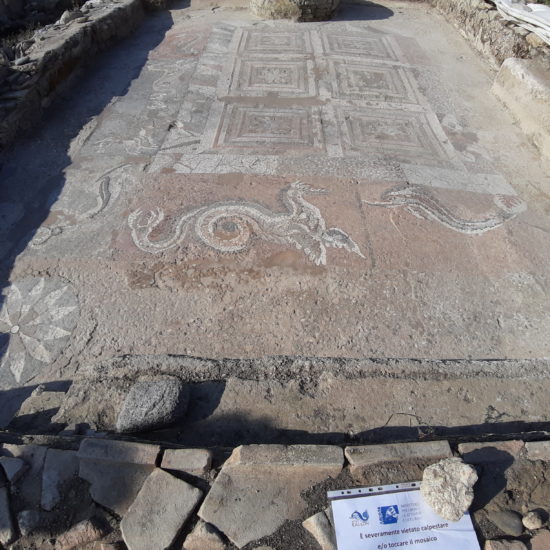 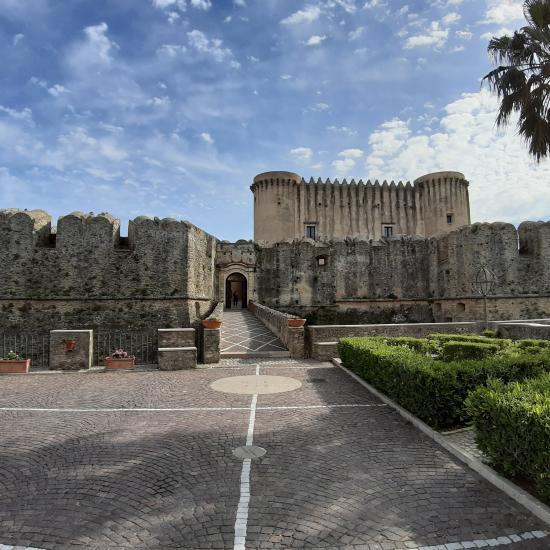 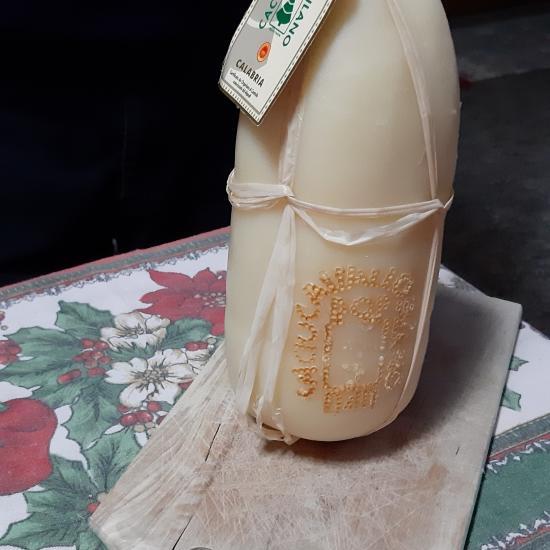 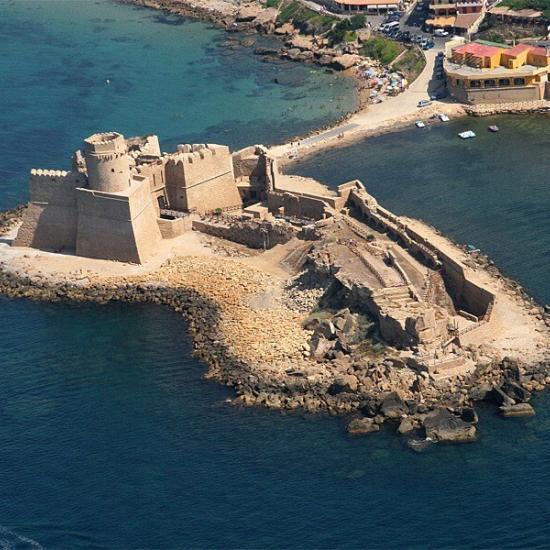 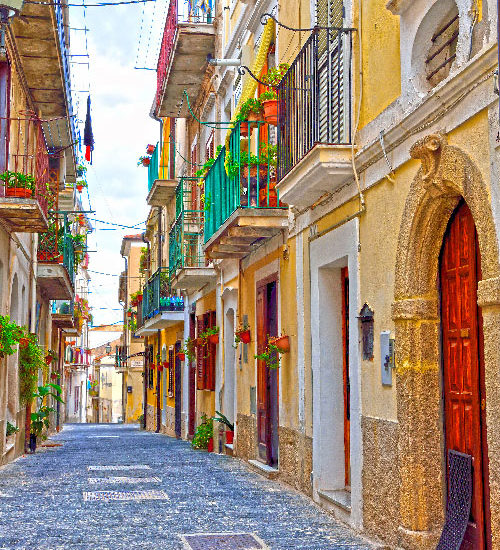 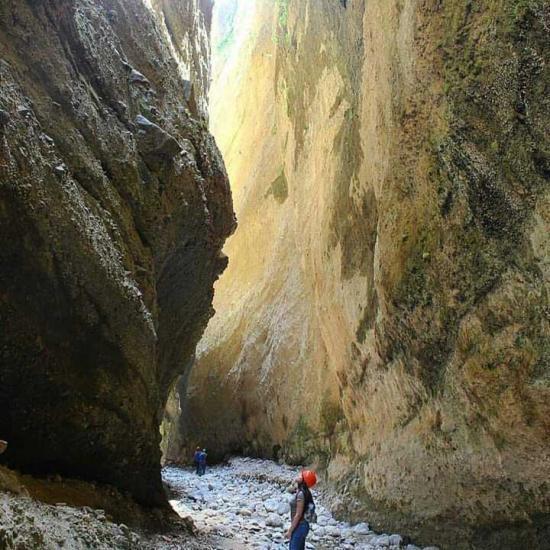